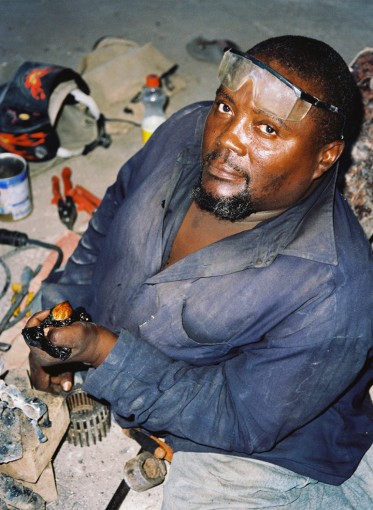 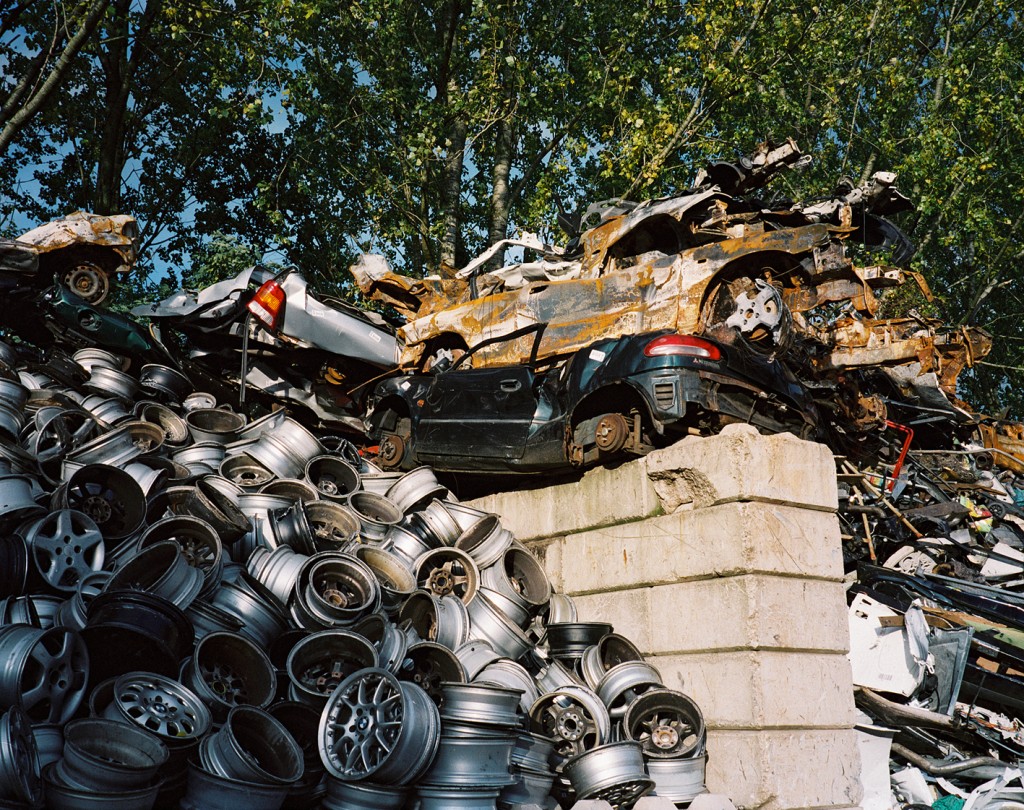 Image above: Cars crashing (the Netherlands, 2012)

In several projects and photography works between 2012-2014 I’ve focused on the connection between natural resources and socio-economic, organic and industrial structures. I’ve combined images and set cross-connections between projects to find a deeper engagement as an artist working in an international environment, between the Netherlands and Tanzania for instance.  As a media consumer and image producer I’ve constantly been searching for a new balance. To visualize a higher awareness of metals and other materials such as wood or plastics. I could go on and on for years, because both our mass industries and natural diversity seem endless, almost hopeless if one realizes the vulnerability of the planet.
My photographic installations ‘Natural presumption 2.0’ and ‘Sacred Metals (Sacraal metaal)’ are results of this creative path. A trip to Russia to visit iron ore mines (project Kursk Magnetic Anomaly) was planned as a thrilling outcome of my visual research related to the theme of Homo Naturalis. I’ve decided to focus on a new project ‘Dutch Mines’, due to political circumstances and other responsibilities. Even though I’ve been dissatisfied about canceling my trip to Russia, I’m very exited about my new destination. 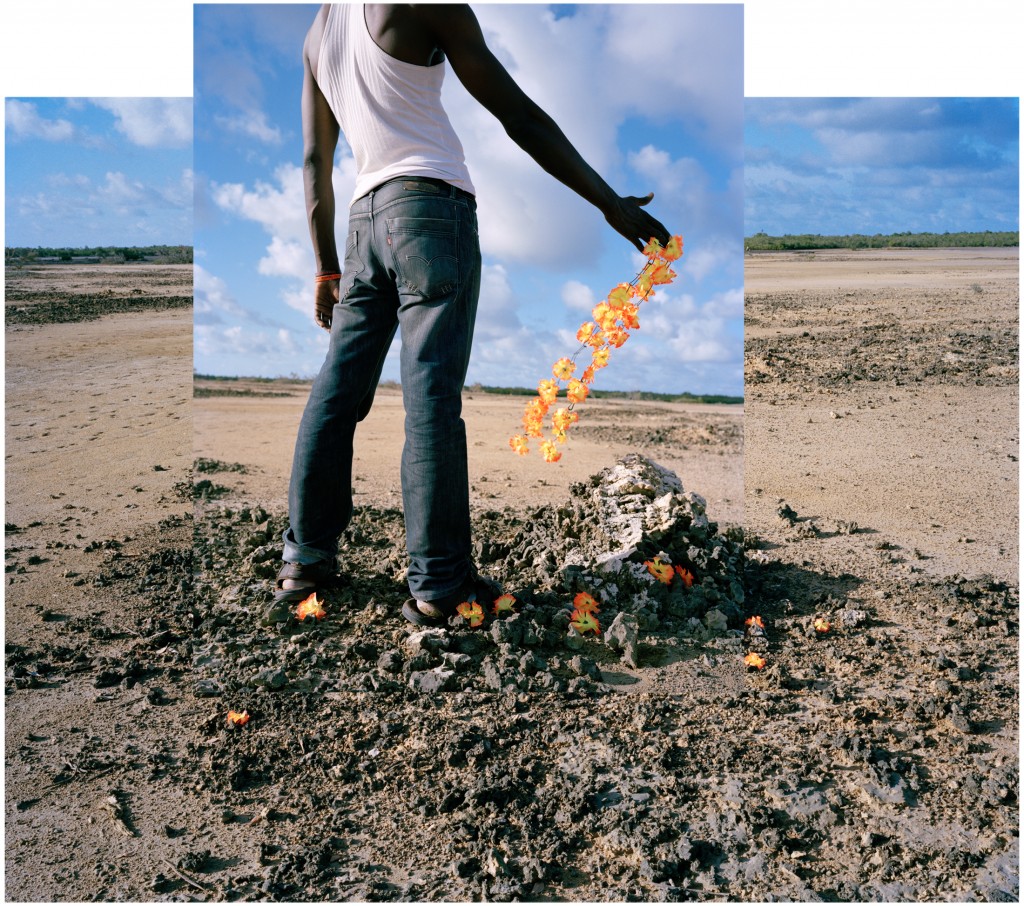 Economy is emotion, trade is character, culture is passion and pain, geology and natural resources are close to love and desire. The major developments in the world do not exist in isolation, but find their expression through people. This expression is sought in Mathilde Jansen’s projects, this expression of history, culture, economy, global trade within a human and personal context. ‘The ways of the world enrich the soul’ and in turn, driven by this experience the soul enriches the world.

Mathilde work combines people’s personal lives with the major movements or shifts in the world: economy, culture and the earth itself.
The people who are the subject of her work, are not portrayed as the representatives of those major developments. Mathilde doesn’t intervene. On the contrary. She portrays the people (as taking part in their day-to-day reality) in all the subtlety that they embody, and in which the major movements in the world find their expression.

Mathilde doesn’t pass judgement, doesn’t impart meaning, but moves naturally in and empathizes with each unique situation on location, with the aim of triggering meaning in the situations that she comes across.

The viewer is invited, is offered the opportunity to participate in this vision of people and the world. Mathilde’s photographs envisage things in a direct yet subtle way. They invite you to look more closely, to discover more profound relations. Ultimately Mathilde shines a light on the issue of human evolution. The potential residing in us all, to deal with our environment and the major movements (the global developments on an intercultural, social and economic level), with which human beings and the world are directly or indirectly connected.

And to lift these to a higher level of thought. Evolution as a spiritual journey of the individual in the wider world. The process of sublimation truly realized, captured in photographs. 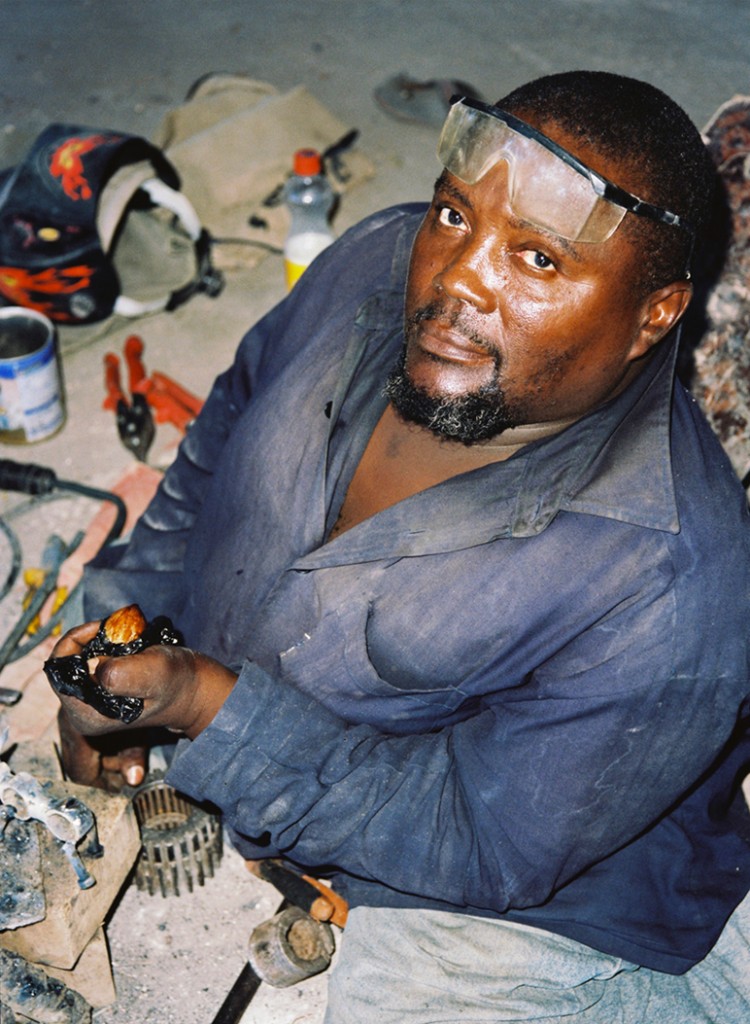 Wonder Welders Workshop, 2012 Dar es Salaam. I’ve portrayed coworkers within (global) metal, mineral and recycling industries. To visualize social awareness within areas where natural resources are found and take part of both local lifestyle or traditions and as well of economical trade and exploitation. This coworker can’t use his legs anymore yet this man expresses mental strength and understanding of vulnerable human conditions, in a touching and provoking way.