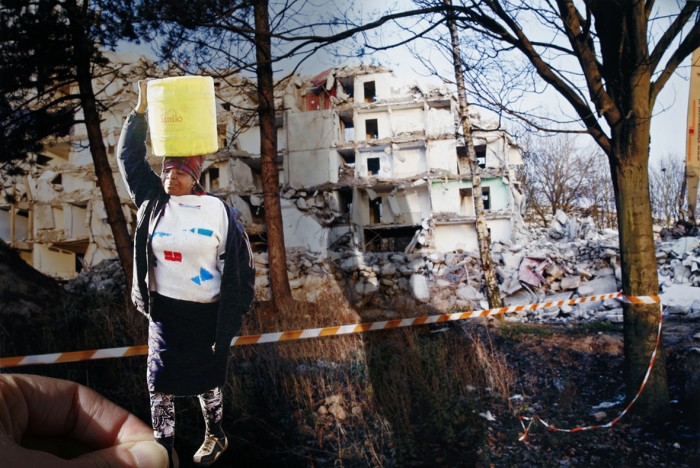 The Bijlmer, an intercultural suburb of Amsterdam, is undergoing a long-term renovation project that may reverse its image as a chaotic ghetto brimming with shadow industries. My collage, Destinations, expresses the universal search for a brighter future with better economical conditions, where two completely different worlds intersect.

The Bijlmer, an intercultural suburb of Amsterdam, is currently undergoing a long-term renovation project that may reverse its image as a chaotic ghetto brimming with shadow industries. The Bijlmer flats are mostly known for their Suriname and Ghanaian communities, with their distinct breed of music and cuisine, dynamic house parties and street festivals, and illegal taxi services.

I lived in an atelier house for over a year, just one block away from the flats. Although I really enjoyed my home, the lush green landscape, and the people, I found it nearly impossible to become a part of the “village” as a temporary resident.

My collage, Destinations, expresses the universal search for a brighter future with better economical conditions; a future in which two completely different worlds intersect. In the back of the image, a flat is broken down in order to build a new apartment block. In the front, I have placed a South African woman living in the famous township Soweto.

I used Soweto as a symbol of Dutch intolerance or fear of informal and improvised settlements and economies. Soweto could represent a “worst case scenario” for developers of a suburb inhabited by people who moved to find better living standards or work, as was the case of the mining industry in Johannesburg.

The woman in my collage represents the universal escape of poor living conditions as a result of segregation. The Bijlmer flat is broken down to welcome a new era of gentrification, mixed neighborhoods and better living standards for all people. Despite the overbearing bureaucratic process and cultural intolerance for the autonomy of the Bijlmer area, I believe inhabitants of the Bijlmer will benefit in the end. And I hope the Bijlmer will maintain its original identity, thus strengthening this new development.